Karol Radziszewski's ‘The Power of Secrets’

‘So many of the struggles of feminist history and theory ... already exist within the very definition of gossip. … Gossip can offer a troubling of simple faith in historical and political representation’, writes Irit Rogoff in her essay ‘Gossip as testimony: a postmodern signature’. [1]  If there is an artist who fully understands the implications of Rogoff’s assertion, it is Karol Radziszewski. ‘The Power of Secrets’, his 2019/20 early-career retrospective at the Ujazdowski Castle Centre of Contemporary Art in Warsaw, was predicated on the political force of information that circulates unofficially: things that are only half-known.

The exhibition began with a selection of the artist’s childhood drawings turned into life-size characters, all of them women or animals, or mythical hybrids of women-as-animals –glamorous, long-haired dogs with mermaid tails. The depictions have an aura of familiarity; not as personalities (although Radziszewski’s real-life Bull Terrier, known on Instagram as Zosia Supermodel, is a minor art world celebrity) but as typologies, in the schematic way that you are taught to write certain letters before your handwriting really becomes yours. That Radziszewski chose to portray not one but a row of princesses, each wearing a crown and a ball gown, is a reminder that princesses, as opposed to the prince, always come in multiples. They engender a truly trans-generational art, an endlessly repeated negotiation of femininity. To draw, Radziszewski shows us, is to confront not just your own imagination but also far more universal cultural archetypes. 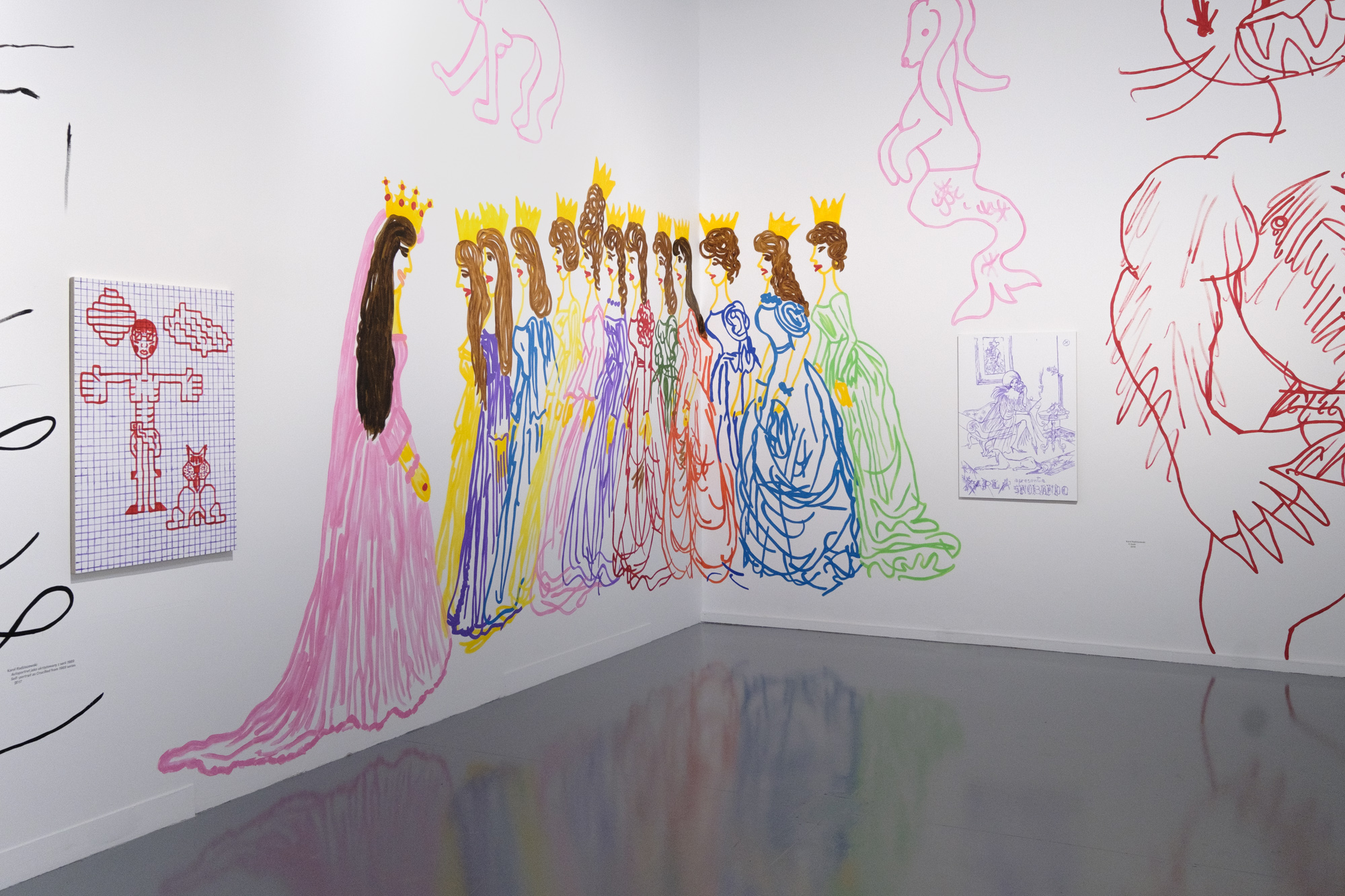 Much of Radziszewski’s practice is based on archival work, performed under the umbrella of the Queer Archives Institute (QAI). This one-man international organisation was founded partly out of necessity, to preserve stories that might otherwise go untold, and partly to subvert the very idea of what counts as an institute. Involving the participants of the histories he is building upon in an active dialogue, also through the medium of video interviews, Radziszewski affirms them as significant historical figures – as artists, even. This is the case with Ryszard Kisiel, author of the bootleg ‘Polish Gay Guide on the Europeans Socialists [sic] Countries’ and the protagonist of Radziszewski’s project Kisieland (2009–ongoing). By rediscovering Kisiel’s career as a part-time employee of a printing press and part-time queer publisher, Radziszewski recounts hearsay – from the 1980s guidebook dedicated to cruising, based entirely on tips circulating among gay men, to Kisiel’s unofficial gay zine Filo, apparently the first in the region.

Radziszewski is fully aware of the apparent perversion of his attempts to retell suppressed historical narratives. Peering inside a room based on a little-known 1978 exhibition of contemporary art – whose latent sexual dynamics were revealed by its curator, Wojciech Skrodzki, only years later – spectators are made to feel like Peeping Toms, voyeuristically surveying the objects through a succession of holes. One could hardly be made to feel more self-aware of one’s position as a beholder; and yet, as a new director took over Ujazdowski Castle at the beginning of 2020, it was Radziszewski who found himself accused of pornographic predilections by the media (not for the first time and probably not the last). For a right-wing government espousing anti-LGBT+ rhetoric, the exhibition’s ‘troubling of simple faith in historical and political representation’ has proven deeply uncomfortable. [2]  Indeed, that included in Radziszewski’s show were neon works by Natalia LL, whose positively vulgar Consumer Art had been removed from display at the National Museum in Warsaw several months prior, seems almost ominous.

But at Ujazdowski Castle, not all the artworks were so easy to censor under the guise of decency. Some, like The Mushroom (2019), might even have seemed incongruous with the rest of the exhibition. Drawing on the lexicon of Minimalism, the large metal sculpture almost resembles the sort of fascination with the grandeur of industrially-manufactured materials that is today associated with Monika Sosnowska’s practice. And yet The Mushroom also hides a secret: it is a reconstruction of a public toilet once known as a prominent Warsaw cottaging spot. Fabricated on the basis of an archival photograph and then crumpled up like a ball of paper, the sculpture is an instance of teleportation. It refuses to follow the fate of the original building, whose colloquial name referred to the conical shape of its roof, and lives on as an artwork instead of being discarded. By reckoning with the history of (post-)Minimalism in the context of masculinity, Radziszewski appears to be following in the footsteps of artists such as Robert Morris.

In fact, artworks that are not his own form the backbone of Radziszewski’s method. A painting based on A R Penck’s West depicts Operation Hyacinth from the mid-1980s, the communist government’s coordinated effort to infiltrate Poland’s gay community. Every detail of Penck’s simplified, graffiti-like image is mimicked by Radziszewski with utmost precision, including the faint expressionistic sploshes of paint in the background. But it is not style alone that the artist is interested in; the East–West tension is also carried over from Penck’s painting. The violence of militarised phallocentrism is juxtaposed with its counter-narrative, the homosexual erotic encounter, policed both by the disciplinary consequences of the global HIV/AIDS epidemic and the menacing threat of the homophobic secret police (embodied, in this case, by the two letters surrounding the rifle-carrying stick-figure on the right-hand side: UB, for Urząd Bezpieczeństwa, or the Department of Security). By echoing a range of recognisable visual vocabularies, Radziszewski is thus involved in two simultaneous dialogues, with the history of art and with the history of queer desire’s permissibility. In his hands, recognisable formal elements become metonyms for the geopolitics of gender and sexuality. Based less on the manifest qualities of his artistic referents than on the range of their latent aspects, for Radziszewski appropriation is only a starting point and not an end in itself. 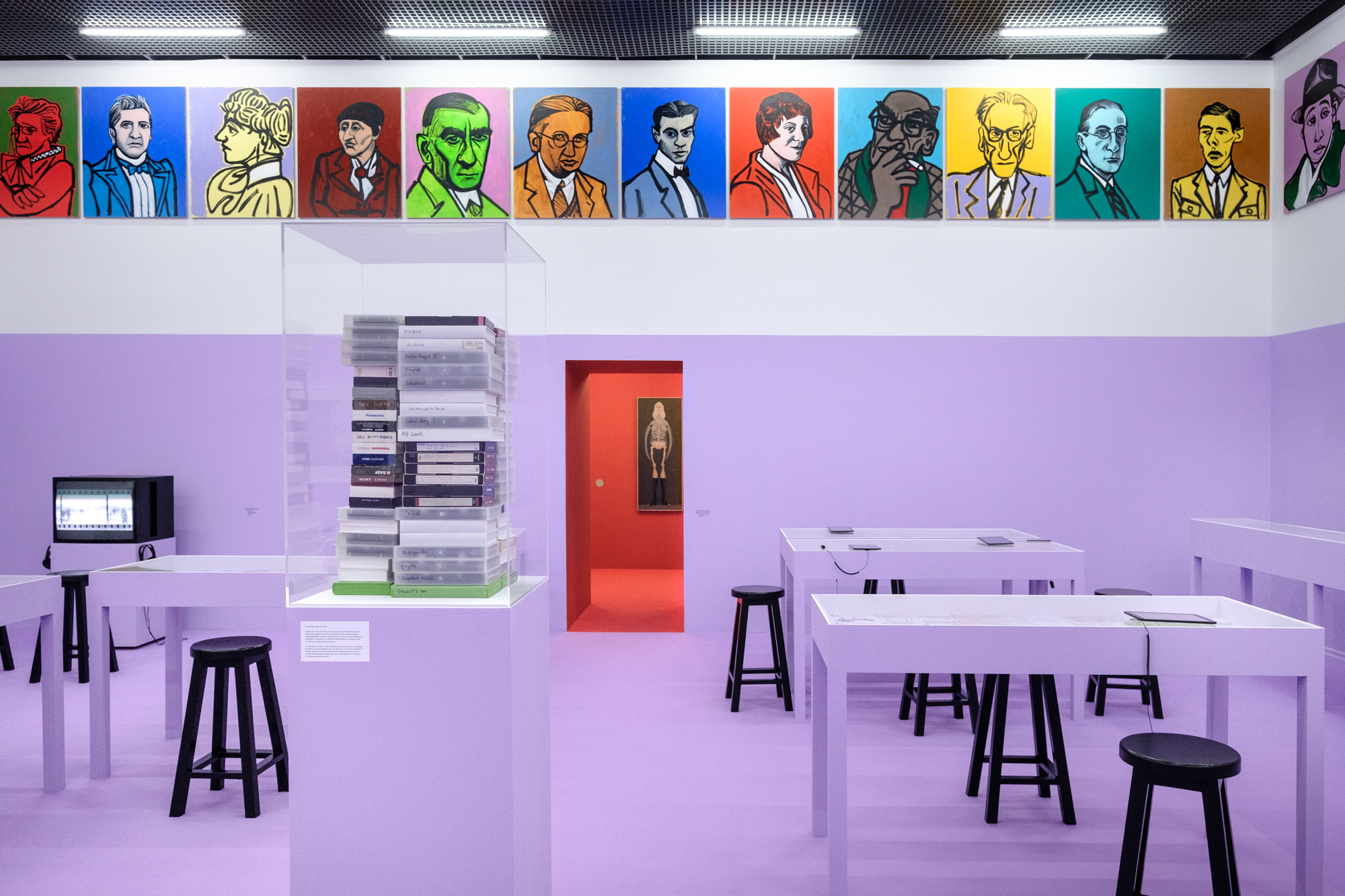 In an adjacent room whose colour scheme is best described as a hyacinth shade of purple, the artist puts the politics of recontextualisation to the test. Displayed far above eye level, a series of colourful paintings entitled Poczet (translated as The Gallery of Portraits) reconstructs the genealogy of Polish culture from the vantage point of non-heteronormativity. Among the protagonists are people whose sexuality was, and sometimes still is, an open secret. A riff on the paternal lineage of presidential portraits, this anti-procreative ancestry serves as an alternative to the Polish Romantic myth of continuity, the kind of vertical patriotic heritage that bravely resists all hiccups and lapses. What is so powerful about Radziszewski’s gesture is that it serves, for at least some of the visitors, as a coming-out of national heroes. It reveals the reverse side of the desire to canonise individuals; since the figures are already engrained in Polish history, their commemoration simultaneously enables us to recollect those sexualities that have been repressed but which cannot be erased.

Ewa Hołuszko’s involvement in the anti-communist Solidarity movement was swept under the carpet when she came out as a trans woman. In a large painting composed of four separate canvases, as if to allude to her complex position in the organisation’s history, she is portrayed recreating Lech Wałęsa’s iconic victory sign, the weight of history looming large above her in the form of the trade union’s familiar logo. Wałęsa, in the meantime, appears elsewhere: alongside Mikhail Gorbachev, he waves the Solidarity flag in a painting hung on wallpaper designed by Radziszewski. Adopting a font reminiscent of comic books, its pattern was based partly on General Idea’s appropriation of Robert Indiana’s LOVE for their AIDS wallpaper (1988), and partly on Kisiel’s use of Donald Duck stickers in a 1989 issue of Filo. Recognising the temporal intersection between the rise in public visibility of queer histories and the fall of communism, Radziszewski exposes the non-linear and often counterintuitive intertwining of political trajectories in post-1989 Poland. His exhibition, as it transpired, did not set out to neglect explicitly heteronormative political figures of Wałęsa’s stature, just as there was never any reason to think of Ewa Hołuszko as being incongruous with the lineage of Solidarity. Radziszewski rejects the temptation to frame his retrospective as a tale of overlooked figures and forgotten events, the way history is often recounted from the position of ignorance, focusing on the marks of his protagonists’ presence instead. East/West, gay/straight, remembered/forgotten. An only seemingly contradictory dualism also lies at the heart of gossip. It is, as Rogoff has noted, a space both of ‘alternative economies’ and of ‘psychic fantasies’ or projection. [3]  As the former, gossip allows Radziszewski to reiterate histories that are at risk of becoming muted. As the latter, it becomes a dirty secret in the Polish national imagination, an impurity to be wiped out from public memory. The exhibition’s strength was, at the same time, the source of public opposition to it. The eponymous power of secrets, in other words, is that they are out.

Marta Zboralska currently lives in London. She was recently awarded her PhD in History of Art from University College London (UCL). Her thesis focused on the Warsaw studio of Henryk Stażewski and Edward Krasiński.